This is a special guest blog post by Eric Matsuoka, Professor CC of Math and Math Coordinator at Leeward CC.

The spring 2015 initiative involved allowing and encouraging students to submit their statistics term projects using Web 2.0 tools instead of traditional documents.  The Revised Bloom’s Taxonomy places creating at its top level.  Web 2.0 tools facilitate both that highest Bloom’s level and also facilitates various forms of collaboration, which is strongly emphasized as a 21st Century skill. 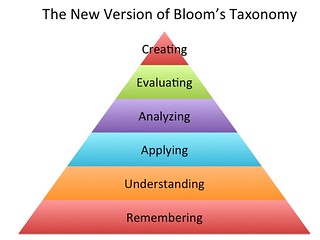 Although some popular news reports suggest that today’s students are adept at creating artifacts using Web 2.0 tools, many students have not connected such experiences to their educational endeavors.  While it was not practical to dedicate class time to demonstrating the use of multiple tools, half of one class session was led by Educational Technologist, Rachael Inake, who introduced students to creating a website using a Google Sites template developed by the Educational Media Center.  Rachael also spent time creating a tutorial video for students who needed to review the directions given in the live presentation.

The intervention was an unqualified success.  16 out of 23 students submitting projects chose to use a Web 2.0 tool.  One student created a video while 15 created Google Sites.  The average project grade for those using Web 2.0 tools was 6 points (half of a letter grade) greater than those submitting traditional paper artifacts.  The average grade for the spring 2015 Web 2.0 submissions were also 8 points greater than the average grade for fall 2014 projects submissions, which were limited to traditional documents.  Student perceptions of the Web 2.0 option and project-based learning itself were unquestionably optimistic, as well:

Unfortunately, offering the Web 2.0 option in the summer session was not successful.  There were confounding factors that make it difficult to determine why students did not try the Web 2.0 option.  One was undoubtedly the short duration of the summer session.  Another is the lack of an in-person training session (although the spring semester video tutorial was made available).  The intention is for the option to be available in the fall semester and, schedules allowing, to have another in-person class session with an Educational Technologist.

Anecdotal reactions from students were generally positive.  The ordinarily-ubiquitous question of how long a report needed to be was virtually nonexistent in the spring.  While students were only required to set their sites to be viewable by their instructor (me), several (links below) made their video and web sites publicly viewable, which is one of the first steps in virtual collaboration.

Have you ever come across a Google service and try to log into it with your Google@UH username only to be told that do not have access to tools like Google Maps, Analytics, Google +, Blogger, YouTube?  Well wait no longer, Expand Your Googleverse!   The university is now allowing you access to “Consumer Apps”.  You simply have to be willing to accept Google’s General Terms of Service.

To learn more you may visit the University of Hawai’i’s Google@UH webpage (http://www.hawaii.edu/google/extra)

Attention creative types, do you need a spot on the web to upload interactive content?  Video, web sites and documents have their own services mainly YouTube, Google Sites (or Weebly or Drupal), and Google Docs.  But what about interactive multimedia content that publishes with its on supporting files and is meant to stand alone like this interactive campus map .

I would normally use Laulima Resources to host many of these projects but I recently came upon another option, Google Drive.  I learned that with a little manipulation of the URL you can get Google Drive to host your online projects.   I had not been using Google Drive because the html pages traditionally show up as html code documents and not as web content.  Follow the instructions below to manipulate your URL which will in turn display the html pages as they are meant to be viewed.

1.  Create a folder in your Google Drive.

4. Next we are going to create the link to your file

6.  Copy this new URL and use this when sharing your content.

Make quizzing, reviewing concepts, or preparing for upcoming final exams fun with a team jeopardy game! Flippity.net was originally used to make flashcards, but now there’s a cool way to use Flippity with a Google Spreadsheet to create a Jeopardy-like quiz game. Ready to create your own? You’ll find the complete instructions and the template spreadsheet doc here.

Step 1: Make a copy of and modify the Google Spreadsheet template

Step 3: Get your Flippity.net link

Step 4: Click your Flippity.net link to launch your game